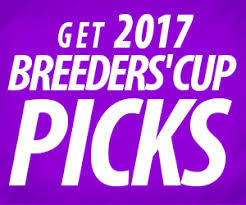 The Breeders’ Cup is one of the premier weekends in horse racing each year.

This year, the event takes place on Friday, November 3rd and Saturday, November 4th, and will be held in Del Mar, California. The site hosting the event is the Del Mar Racetrack. There are 13 races in the Breeders' Cup Challenge series, with the crowning race being the Breeders’ Cup Classic, the last race of the Cup.

The Breeders’ Cup generally features full fields, and longshot winners are somewhat common, as a large number of top-ranked horses are competing in most of the races. Most races allow for up to 14 starters per race. The Turf Sprint is the exception, being restricted to 12 starters.

Besides the Classic, the Breeders’ Cup Juvenile is another significant highlight race on Saturday. The Juvenile is a race of interest because it features many of the most promising two-year-olds, and it’s entirely possible that the favorites for next year’s Kentucky Derby may emerge as a result of its performance in the Juvenile.

The big race on Friday is the Breeders’ Cup Distaff, which this year features the mare Forever Unbridled, as well as a number of top three-year-olds.

Here is a full schedule of the races, with all times being listed as EST:

All post positions for the 13 races will be drawn starting at 5:30 pm EST on Monday, and the event itself will be streamed on the official Breeders’ Cup website.

The drawing order for all Breeders’ Cup races is as follows:

By most accounts, the favorites are Arrogate, Collected and Gun Runner. However, a number of other horses in this field are capable of challenging the favorites, assuming that they're in form and run a favorable race.


If Arrogate is in top form, it’s most likely that he’ll be too much for the other horses. The question for Gun Runner is the length of the Classic, as at 1 1/4 miles it may be long enough to tire him toward the later stages. Collected comes into the Classic having won eight of his last 11 races, and has defeated Arrogate in the past.
Email ThisBlogThis!Share to TwitterShare to FacebookShare to Pinterest
Newer Post Older Post Home